Spotify and The Last Pickle (TLP) have collaborated over the past year to build Medusa, a backup and restore system for Apache Cassandra which is now fully open sourced under the Apache License 2.0.

Backing up Apache Cassandra databases is hard, not complicated. You can take manual snapshots using nodetool and move them off the node to another location. There are existing open source tools such as tablesnap, or the manual processes discussed in the previous TLP blog post “Cassandra Backup and Restore - Backup in AWS using EBS Volumes”. However they all tend to lack some features needed in production, particularly when it comes to restoring data - which is the ultimate test of a backup solution.

Providing disaster recovery for Cassandra has some interesting challenges and opportunities:

Medusa is a command line backup and restore tool that understands how Cassandra works.
The project was initially created by Spotify to replace their legacy backup system. TLP was hired shortly after to take over development, make it production ready and open source it.
It has been used on small and large clusters and provides most of the features needed by an operations team.

The command line tool that uses Python version 3.6 and needs to be installed on all the nodes you want to back up. It supports all versions of Cassandra after 2.1.0 and thanks to the Apache libcloud project can store backups in a number of platforms including:

Backup A Single Node With Medusa

Once medusa is installed and configured a node can be backed up with a single, simple command:

Along with the SSTables, Medusa will store three meta files for each backup:

Full backups create a complete copy of all SSTables on the node each time they run. Files that have not changed since the last backup will be copied in the backup catalog into the new backup (and not copied off the node). In contrast to the differential method which only creates a reference to files. Full backups are useful when you need to take a complete copy and have all the files in a single location. 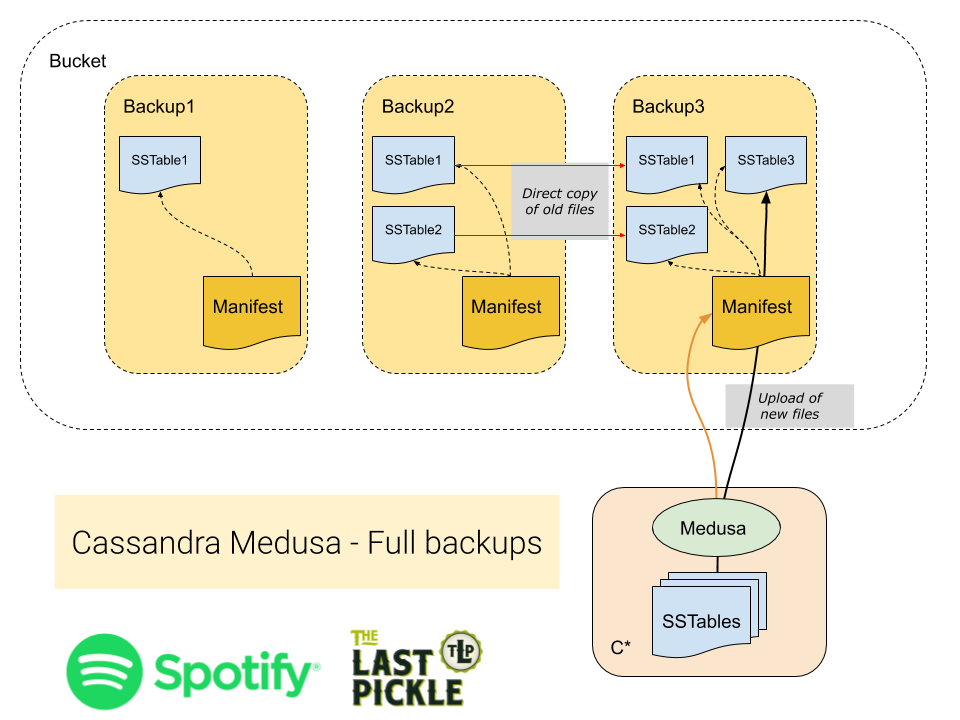 Differential backups take advantage of the immutable SSTables created by the Log Structured Merge Tree storage engine used by Cassanda. In this mode Medusa checks if the SSTable has previously being backed up, and only copies the new files (just like always). However all SSTables for the node are then stored in a single common folder, and the backup manifest contains only metadata files and references to the SSTables. 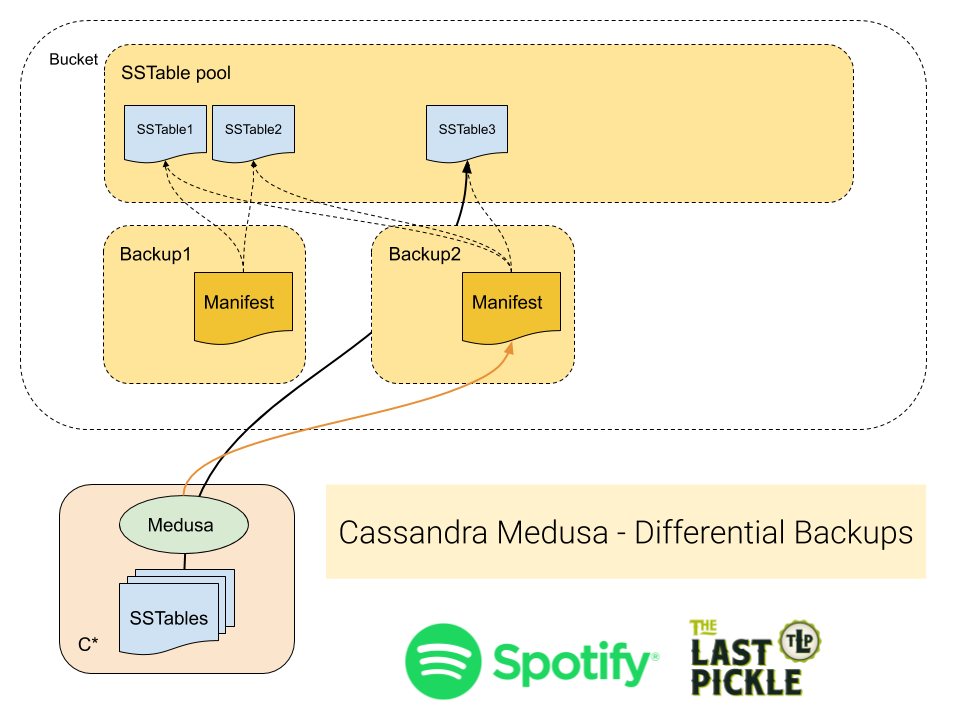 Backup A Cluster With Medusa

Medusa currently lacks an orchestration layer to run a backup on all nodes for you. In practice we have been using crontab to do cluster wide backups. While we consider the best way to automate this (and ask for suggestions) we recommend using techniques such as:

All backups with the same “backup name” are considered part of the same backup for a cluster. Medusa can provide a list of all the backups for a cluster, when they started and finished, and if all the nodes have completed the backup.

To list all existing backups for a cluster, run the following command on one of the nodes:

In the example above the backup called “2019081307” is marked as incomplete because 1 of the 180 nodes failed to complete a backup with that name.

It is also possible to verify that all expected files are present for a backup, and their content matches hashes generated at the time of the backup. All these operations and more are detailed in the Medusa README file.

While orchestration is lacking for backups, Medusa coordinates restoring a whole cluster so you only need to run one command. The process connects to nodes via SSH, starting and stopping Cassandra as needed, until the cluster is ready for you to use. The restore process handles three different use cases.

Case #1 - Restore To The Same Cluster

This is the simplest case: restoring a backup to the same cluster. The topology of the cluster has not changed and all the nodes that were present at the time the backup was created are still running in the cluster. 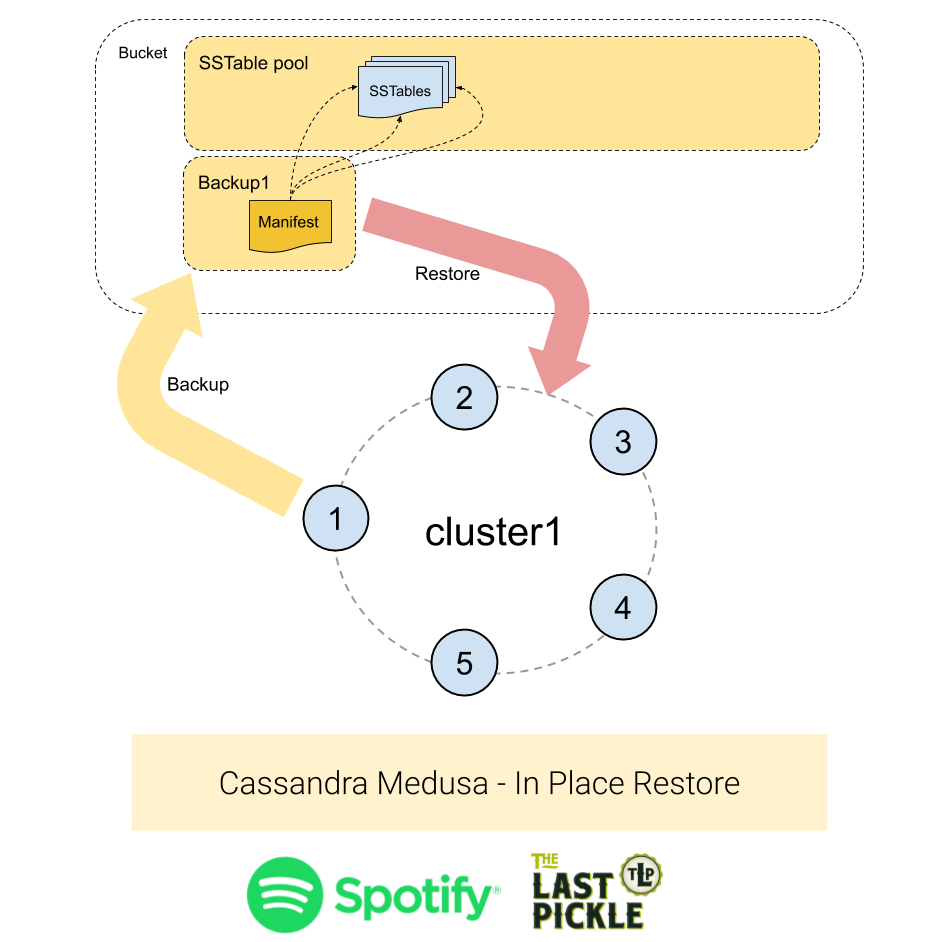 Use the following command to run an in-place restore:

To complete this restore each node will:

The schema does not need to be recreated as it is contained in the system keyspace, and copied from the backup.

Restoring to a different cluster with the same number of nodes is a little harder because: 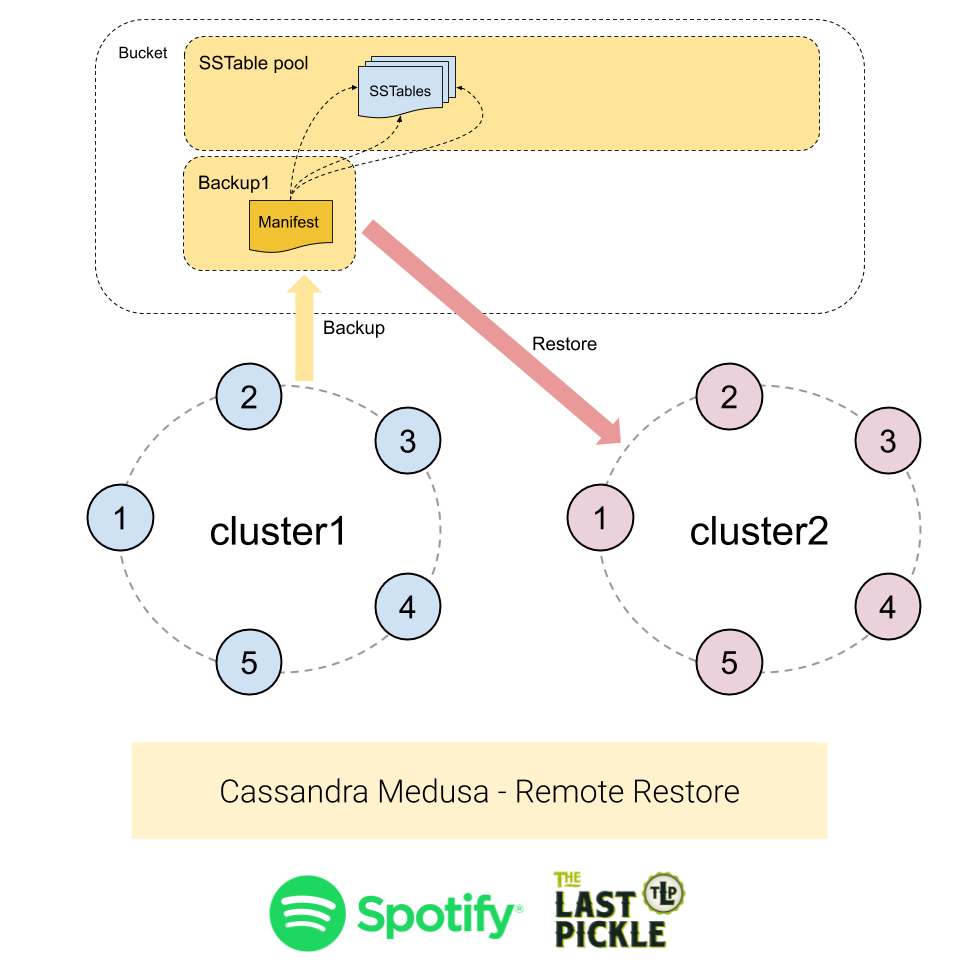 Use the following command to run a remote restore:

The host-list parameter tells Medusa how to map from the original backup nodes to the destination nodes in the new cluster, which is assumed to be a working Cassandra cluster. The mapping file must be a Command Separated File (without a heading row) with the following columns:

In addition to the steps listed for Case 1 above, when performing a backup to a remote cluster the following steps are taken:

Restoring to a different cluster with a different number of nodes is the hardest case to deal with because:

The last point is the crux of the matter. We cannot get the same token assignments because we have a different number of nodes, and the tokens are assigned to evenly distribute the data between nodes. However the SSTables we have backed up contain data aligned to the token ranges defined in the source cluster. The restore process must ensure the data is placed on the nodes which are replicas according to the new token assignments, or data will appear to have been lost.

To support restoring data into a different topology Medusa uses the sstableloader tool from the Cassandra code base. While slower than copying the files from the backup the sstableloader is able to “repair” data into the destination cluster. It does this by reading the token assignments and streaming the parts of the SSTable that match the new tokens ranges to all the replicas in the cluster. 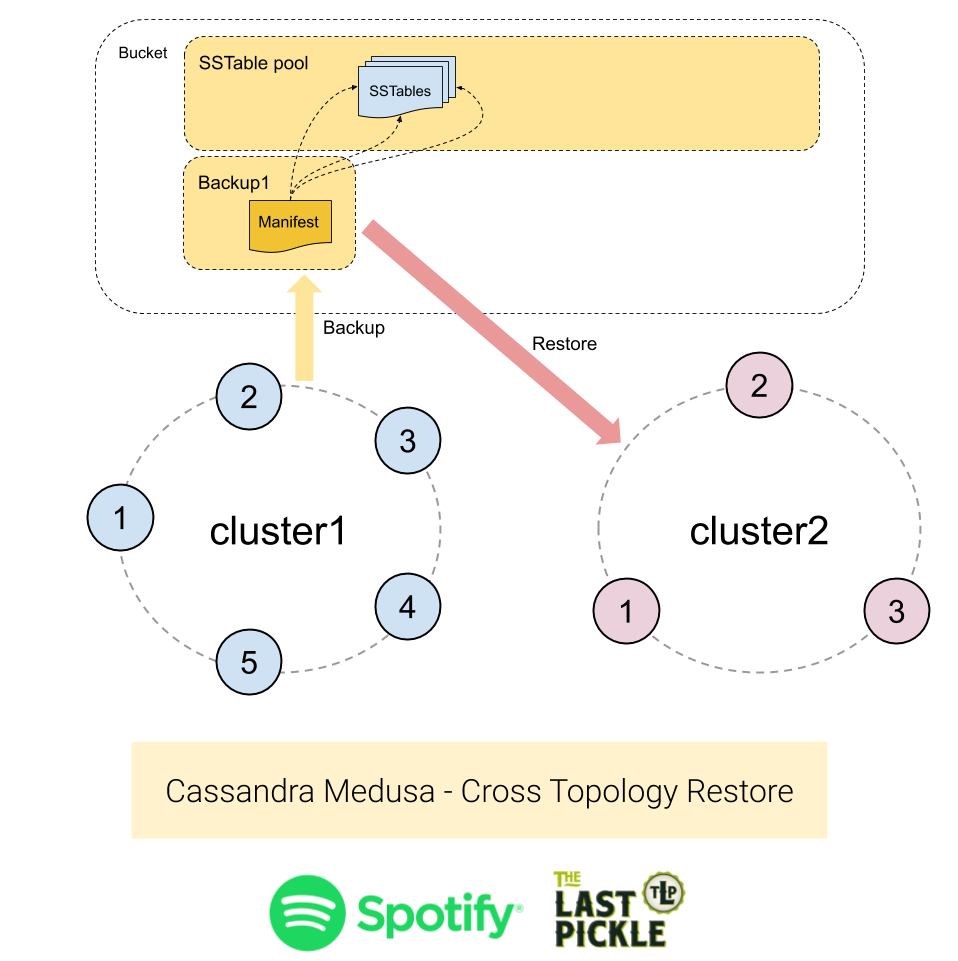 Use the following command to run a restore to a cluster with a different topology :

Restoring data using this technique has some drawbacks:

A few extra words on the amplification of data when restoring using sstableloader. The backup has the replicated data and lets say we have a Replication Factor of 3, roughly speaking there are 3 copies of each partition. Those copies are spread around the SSTables we collected from each node. As we process each SSTable the sstableloader repairs the data back into the cluster, sending it to the 3 new replicas. So the backup contains 3 copies, we process each copy, and we send each copy to the 3 new replicas, which means in this case:

The following sequence of operations will happen when running this type of restore:

Medusa is now available on GitHub and is available through PyPi. With this blog post and the readme file in the repository you should be able to take a backup within minutes of getting started. As always if you have any problems create an issue in the GitHub project to get some help. It has been in use for several months at Spotify, storing petabytes of backups in Google Cloud Storage (GCS), and we thank Spotify for donating the software to the community to allow others to have the same confidence that their data is safely backed up.

Also, we’re looking to hire a Cassandra expert in America.