Have you ever relived a past experience and found it better the second time round? For example I used to love Monkey Magic when I was a child, but am not such a big fan now. When oh when will Pigsy change his piggish ways? The first time I got to see how a Database actually worked was in 2010 when I started playing with Apache Cassandra. It was a revelation after years of using platforms such as Microsoft SQL Server, and I decided to make a career out of working with Cassandra. It’s now 2016 and the Cassandra storage engine recently went through some big changes with the release of 3.x. Once again I have a chance to dive into the storage engine, and this time it is even more enjoyable as I have been able to see how the project has improved. Which has resulted in this post on how the 3.x storage engine ecodes Partitions on disk.

Databases, or to be precise databases that can scale, are all about how to get bytes on and off disk. The team responsible for the 3.x storage engine have done an amazing job making it easier for Cassandra to get bytes off disk. I’ll try to take a look at that soon, for now I am going to look at how data is laid out on disk.

The first step in understanding the 3.x storage engine is to accept the new mental model. Those that knew the Thrift API prior to Cassandra 3.0 basically knew how the storage engine worked; each internal row was an ordered list of columns that optionally had a value. This was kind of fun to start with, then we started having more complicated use cases which lead to some common abstractions. These abstractions were formalised in CQL 3, which gave birth to terms such as Partition and Clustering that while they have become the lingua franca for Cassandra were not natively supported by the previous storage engine.

Starting with the 3.x storage engine Partitions, Rows, and Clustering are natively supported. A Partition is a collection of Rows that share the same Partition Key(s) that are ordered, within the Partition, by their Clustering Key(s). Rows are then by globally identified by their Primary Key: the combination of Partition Key and Clustering Key. The important change is that the 3.x storage engine now knows about these ideas, it may seem strange but previously it did not know about the Rows in a Partition. The new storage engine was created specifically to handle these concepts in a way that reduces storage requirements and improves performance.

Serialising to the -Data.db component of the SSTable starts with the Partition. When we decide to flush a Memtable to disk a call to Memtable.FlushRunnable.writeSortedContents() is made, this iterates the Partitions in the Memtable making a call for each that ends up at BigTableWriter.append(). As we are focusing on Partitions we will be looking at what happens when ColumnIndex.writeAndBuildIndex() is called.

At a broad level the layout of a Partition in the -Data.db file has three components: A header, following by zero or one static Rows, followed by zero or more Clusterable objects.

Clusterable objects are simply Objects that can be ordered by a ClusteringPrefix. Generally that means something that extends Unfiltered, which has a handy Kind enum with two values: ROW or RANGE_TOMBSTONE_MARKER. Which means on disk a Partition consists of a header, followed by 1 or more Unfiltered objects.

The partition header has a simple layout, containing the Partition Key and deletion information.

A Row may be either static or non-static. If the Partition contains a static row it is written before the Clusterable objects. It’s important to remember that as we are flushing from the Memtable we are dealing with a fragment of the Partition. That is a summary of the recent inserts into the table; if no recent inserts wrote to the static columns the Partition in the Memtable will not contain a Static Row. As we will see below, the only difference between a static and non-static Row on disk is the presence of a ClusteringPrefix. 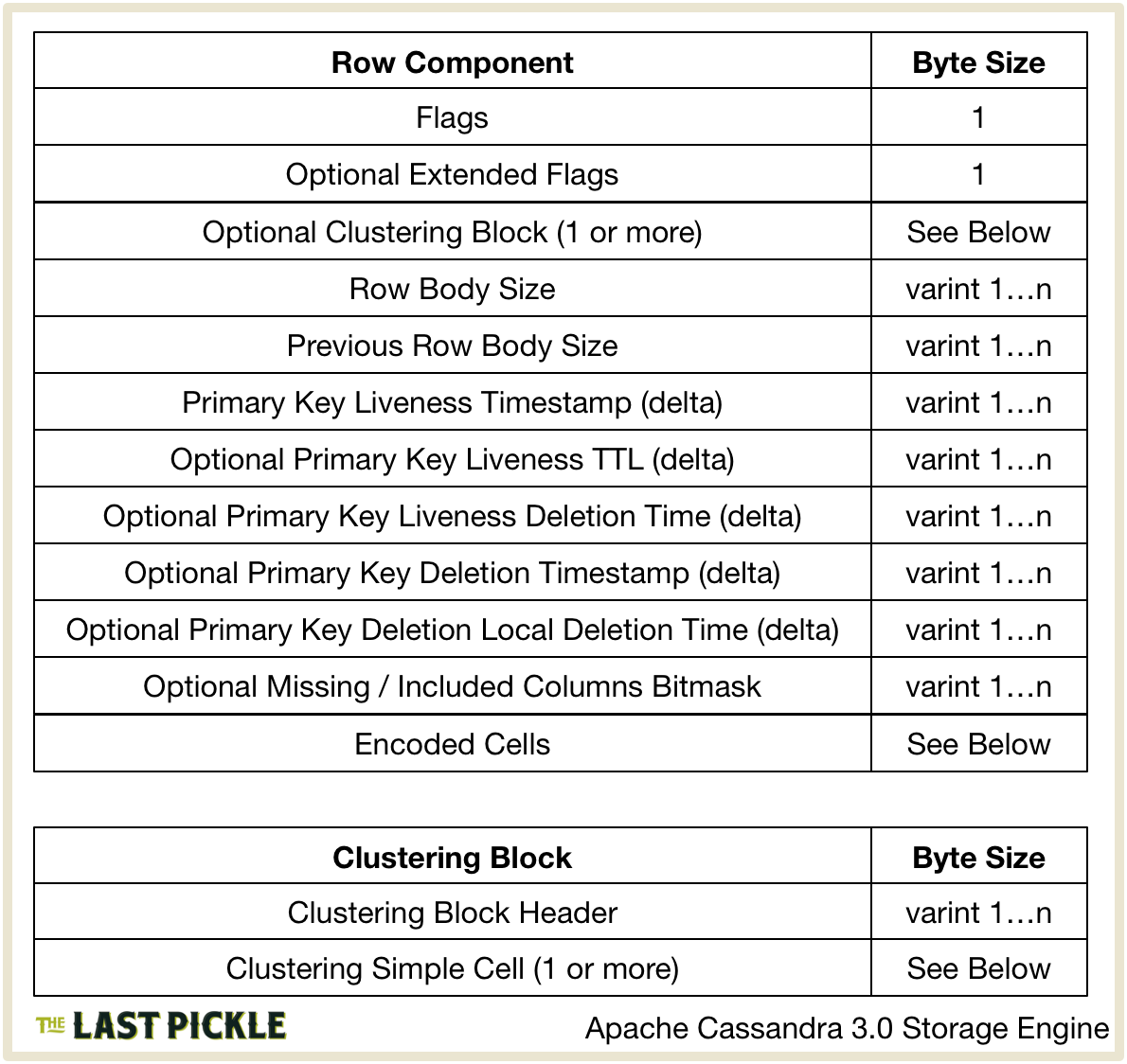 Lastly the Cells in the row are encoded, I’ve broken this into Simple and Complex Cell encoding. Encoding for Simple Cells is handled by BufferCell.Serializer.serialise(). 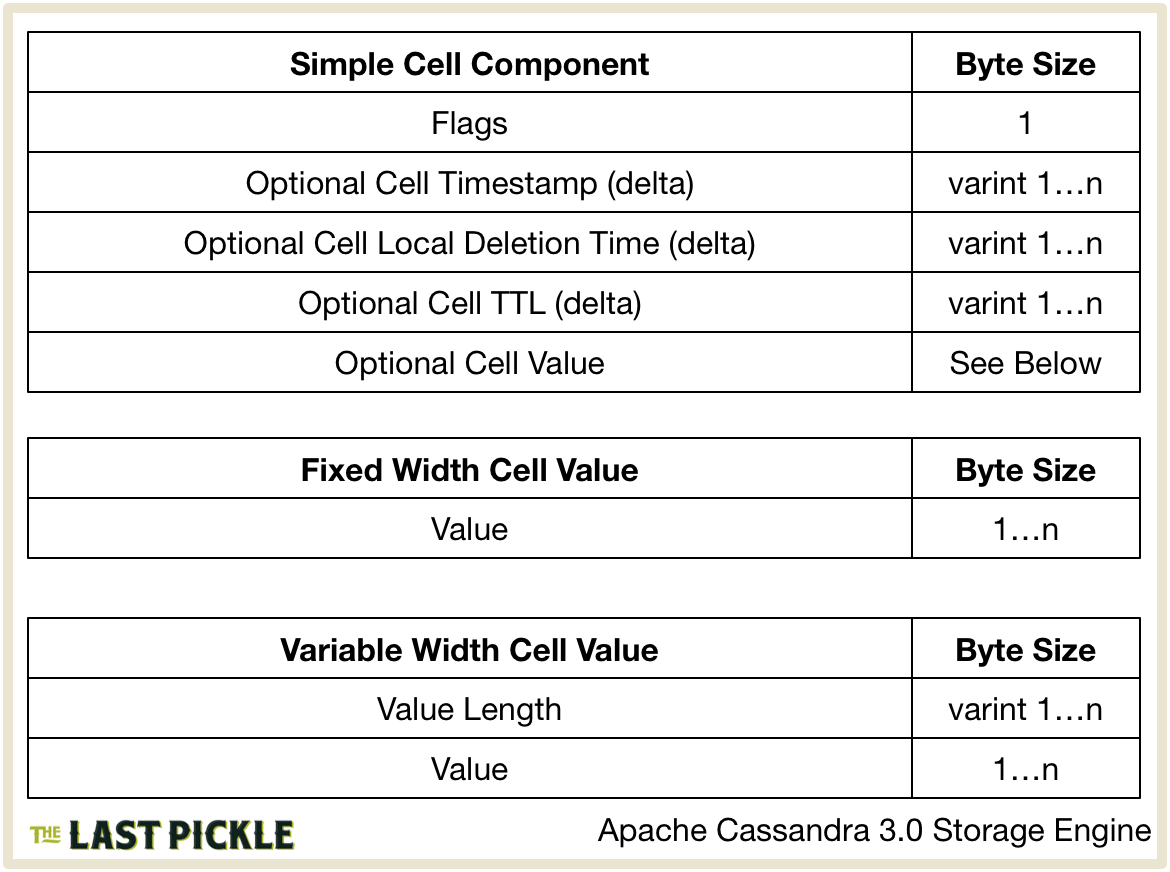 ComplexColumnData are a “(non-frozen collection or UDT)” (from CellPath) and as the name suggests are more complex than Simple Cells. Encoding is handled by UnfilteredSerializer.writeComplexColumn(). 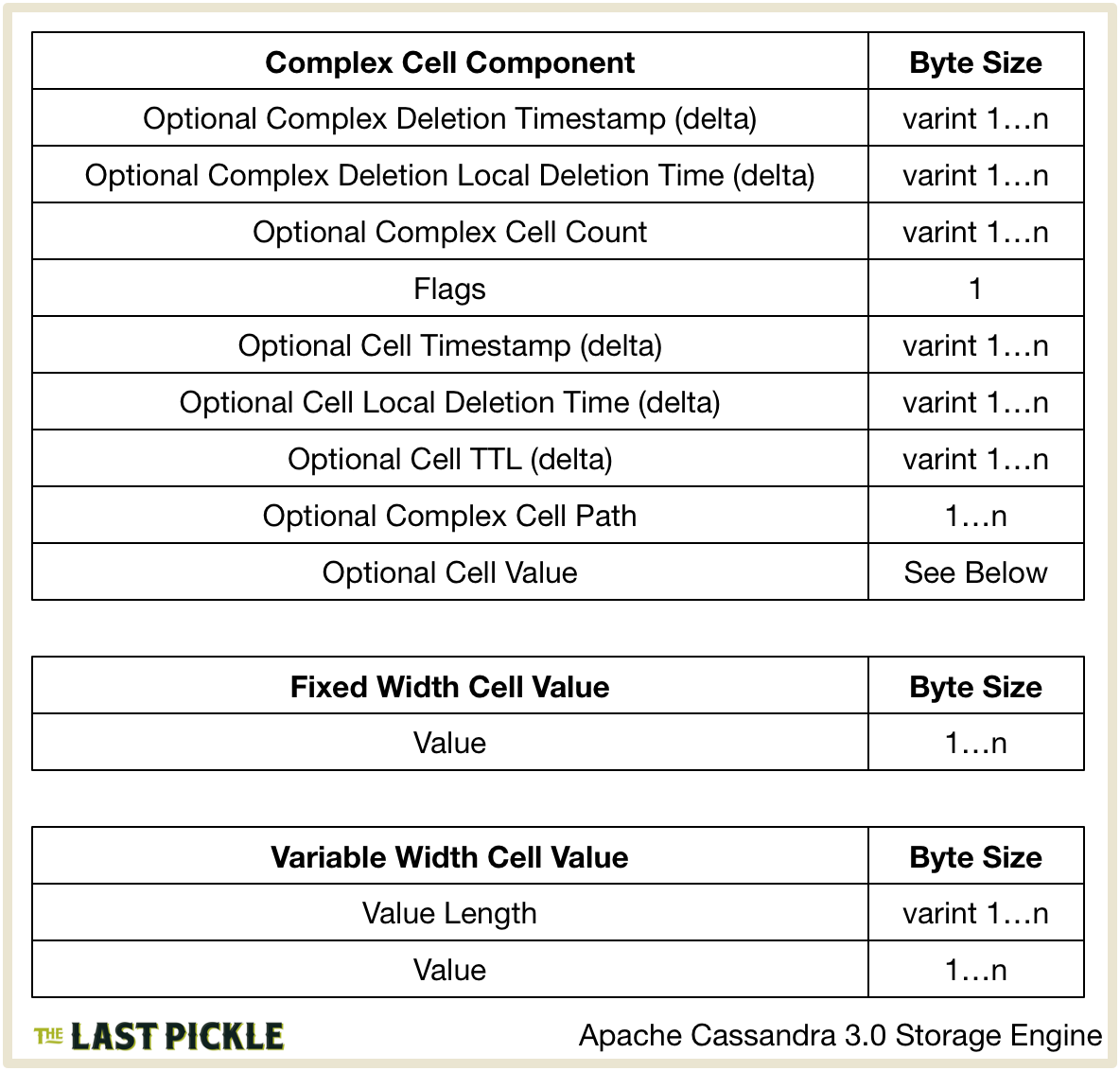 Range Tombstone are used to record deletions that are removing more than a single Cell. For example when a list<> Column is overwritten all of the previous contents must be “deleted”. My treatment of them here is somewhat superficial, I will only be explaining how they are committed to disk.

The RangeTombstoneMarker is serialized by one of the UlfilteredSerializer.serialize() overloads. 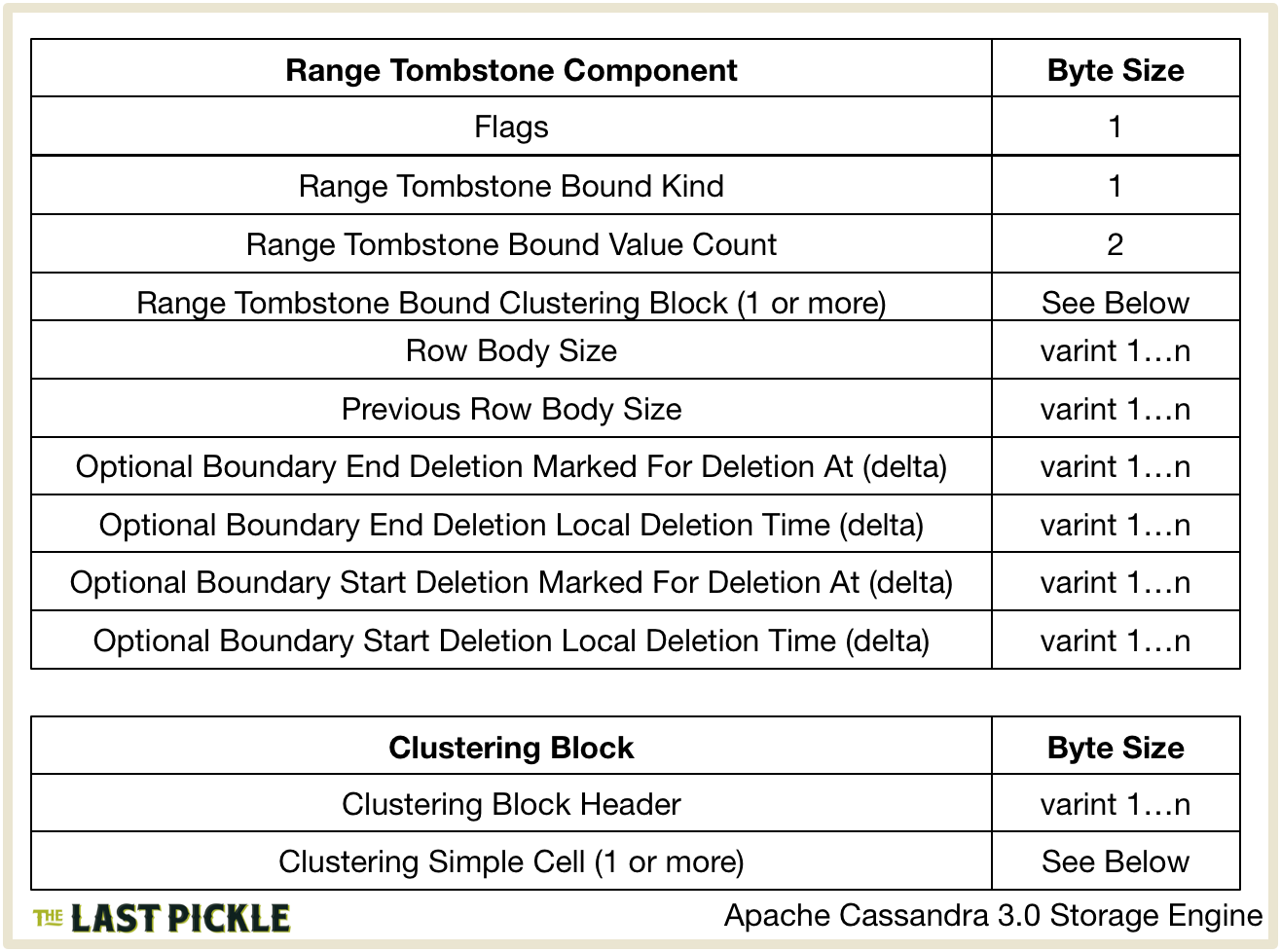 Hopefully this look at how the Partition is encoded in the -Data.db file has given you a taste of the massive changes in the 3.x storage engine. If you are new to Cassandra take a look at this 4.5 year old post about Cassandra Query Plans to see how just how far things have come.

Luckily for me there is still more to learn :)